The request:  Make a jewelry set that will match the dress of a client’s wife

The dilemma: It has to be done in 2 weeks.

The solution: I asked the client to send me a photo of the wife’s dress.  I received the email 5 days later.

The dress had hints of red-orange.  It had a satin sheen that displayed darker colors under different lights and under shadows.

I was at lost with what necklace design I could make.

I had to make the necklace stand out against the dark and light effect of the dress but without making a distraction.  I wanted to make it blend but not really. I wanted to craft it in a way that the client’s wife will be able to use it on formal occasions, during casual days, and even at the office.  That’s the ClassicSparklers’ trademark: versatility in all aspects.

The dress’ neckline grabbed my attention and I knew I had to start with that.

Also, the client’s wife wanted me to use the garnet gemstone.  I made a rundown in my head if I had enough available in stock. The garnets that I had have a dark, wine red color.  With my 14k gold, they will stand out, yes, but they will look too plain.  I had to add something else.

After considering all these, I was finally able to create another beauty: 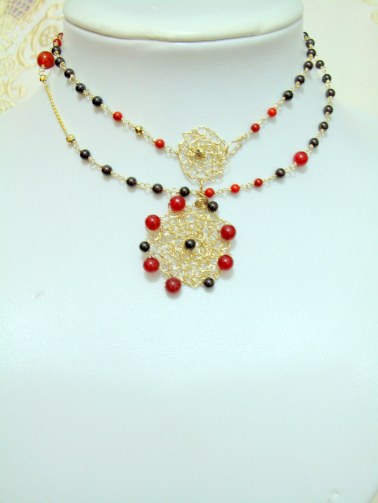 I used garnet, carnelian and rubellite, thus calling it “Trio Burst”.  They gave good contrast to the garnet while at the same time adding texture because of their difference in size.

Also, I used pyrite for that usual sparkle!

But this would not be a ClassicSparklers piece if it were to be used ONLY for this occasion, right? So I gave it the ability to turn into these other options:

Notice something missing compared to the first photo?

I made this part detachable so that the client’s wife can use it separately with a nice gold chain or a satin ribbon.

But I did not stop there 🙂 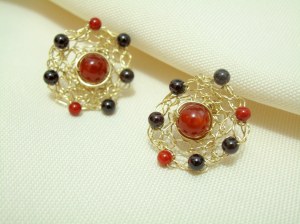 If you would like me to create something as fabulous and one of a kind as this set, you can contact me thru:

1.  Drop me an email at thedesigner@classicsparklers.com

2.  Leave a message at my store